Iron Rich Foods and Why We Need Them

Iron Rich Foods and Why We Need Them 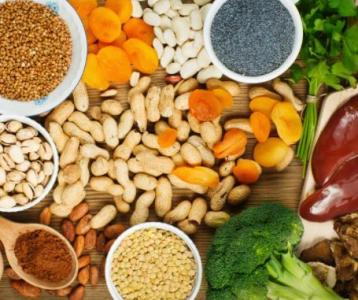 Iron is a mineral found in many of the foods we eat.

What is iron’s primary role in the human body?

What are the symptoms of iron deficiency?

Iron deficiency is common, especially among toddlers and adolescent girls. Iron deficiency can lead to anemia. Symptoms of anemia include pale skin, irritability, fatigue, weakness, and pica (eating strange things such as ice or dirt). Severe anemia can also lead to shortness of breath and rapid heart rate. Furthermore, an association has been found between iron deficiency anemia in infants and young children and their cognitive and behavioral development.

Full term infants are born with sufficient iron stores to last the first 4 - 6 months of life. At that time breastfed infants should be given iron-rich complementary foods (such as iron fortified cereals, vegetables with high iron content, and red meats) or an iron supplement. Standard infant formula contains enough iron to meet a baby’s needs. To help prevent anemia do not give babies cow’s milk until after 12 months of age and avoid giving more than 16 ounces a day of cow’s milk after 12 months of age.

How much iron do children need?

Animal products such as meat, seafood, and poultry contain both heme and non-heme iron. Plants and iron-fortified foods contain only non-heme iron. 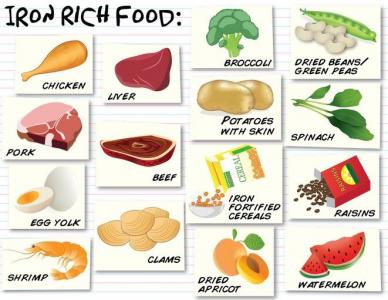 Eat iron-rich foods together with those high in vitamin C (such as citrus, strawberries, cantaloupe, peppers, and broccoli) to increase iron absorption.

Foods high in calcium and foods containing tannins (such as tea and coffee) can inhibit iron absorption when eaten together. Antacids and calcium supplements can also decrease iron absorption.

What should you do if you are worried about your child’s iron intake?

Talk to your healthcare provider! They can give you guidance on dietary sources of iron, test for anemia, and suggest a supplement if needed.