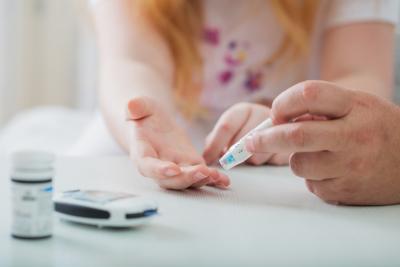 Diabetes mellitus is a condition that is being seen increasingly in children and is caused by an excess of sugar (“glucose”) in the bloodstream.

There are two main types of diabetes:

Parents often wonder how they can tell if their child is showing signs of Type 1 Diabetes.

Usually, these signs are subtle at first, and may consist of:

If these signs are not noticed, symptoms may become more severe and typically include vomiting, dehydration, deep heavy breathing, and impairment of consciousness.

Type 2 symptoms tend to be similar but are even more subtle, sometimes to the point that they are ignored. Type 2 Diabetes more often affects teenagers and adults, many of whom are overweight. Some may have an increase in skin pigmentation around the neck or in the armpits or groin. This is called acanthosis nigricans and is associated with a higher chance of developing Type 2 Diabetes.

With poor nutrition and insufficient exercise, there have been dramatic increases in weight gain in American children and adolescents in recent years, and the Type 2 incidence has likewise increased.

Parents also ask whether we can test to see if their child currently has diabetes or will eventually develop diabetes even though there are no present symptoms.

Current diabetes is relatively straightforward to diagnose:  a urine test and/or a blood test can generally answer that question clearly.

It’s harder to tell if someone will eventually go on to develop Type 1 or Type 2 Diabetes and harder still to guess when that point may come, if at all. There has been much research interest in developing testing for markers that may signal ultimate diabetes, but results are available more as probabilities as opposed to definite predictors. No established treatments are being proposed for asymptomatic children who may show one or more of these markers. Research, however, is taking place at a rapid pace and will likely give us more answers soon.

If a child is diagnosed with Type 1 Diabetes, they would typically be admitted to a hospital to start on insulin and correct any fluid needs. At the same time, the child and their family would start an intensive educational program in which they would learn about insulin, blood glucose and ketone checking, diet, and exercise. They may also learn about the eventual use of an insulin pump and blood glucose monitors.

Newly diagnosed Type 2 patients may not require hospitalization but can be treated with oral medications and taught as outpatients how to manage their diet and exercise program and to check blood glucoses. In both cases, follow-up care would be outlined, and appointments made for endocrine and pediatric visits.

Goals for both Type 1 and Type 2 patients are to maintain a normal lifestyle with minimal if any modifications of activities once they and their families are armed with the appropriate education and care instructions. Technology has helped us to a huge degree in managing day-to-day self-care for kids and adults alike, but close follow-up by an endocrinologist, usually every 3 months, is important to look for pattern changes and suggest dose modifications.

Should you have any concerns, your pediatric care provider can point you in the proper direction to check this out further. At Annapolis Pediatrics, we’d be happy to help with any questions.