Introduction of Solid Food in Babies

Introduction of Solid Food in Babies

Does your little one seem entranced every time you sit down to eat lately? Could it be time to try some solid food? This can be an exciting but daunting milestone for many parents. Should I wait? What should I give first? How much should I give? How often? There are many personal, cultural and social factors influencing infant feeding practices. However, there are also evidence-based principles that we as pediatricians follow when counseling parents about introducing solid foods to babies. 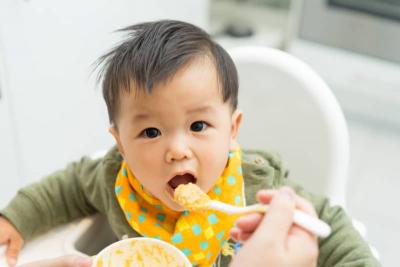 Complementary foods can be safely introduced between the age of 4 and 6 months in a typically developing full-term baby. By this age, baby’s gastrointestinal tract has matured enough to digest and absorb all nutrients. Baby has also achieved several developmental milestones needed for the success of this process:

The timing of the introduction of complementary foods in babies has been the subject of debate for a long time. Research studies have demonstrated no difference in growth between infants who received their first solid foods at age 4 versus 6 months. The exact timing should be individualized and based on your baby’s developmental readiness. However, there are special considerations when it comes to food allergies. Recent evidence has shown a decreased rate of peanut allergy in certain high-risk infants with first exposure to peanut between age 4 and 6 months. Research is ongoing on whether this applies to other allergy-causing foods (eggs, soy, fish).

Choice of baby’s first food is largely influenced by tradition but there are important nutritional factors to consider. An exclusively or partially breastfed baby’s iron stores start to become depleted between ages 4 and 6 months, while this nutrient remains critically important for brain development and blood formation. Infant cereals and meats are therefore great choices for baby’s first foods as they are rich in iron. In the United States, most commercial infant cereals are fortified with iron and roughly 2 servings daily are able to meet a young infant’s iron requirement. Due to concerns about arsenic contamination of rice cereal, many parents have become hesitant to offer these foods. However, increasing the variety of cereals offered (e.g. oat, barley) can reduce the risk of toxic exposures while avoiding the development of iron deficiency anemia.

Whether you choose to go with cereal, meat, fruit or vegetables, stick to one new food at a time. Wait at least three days before introducing another food in order to allow baby to get used to it and also to ensure that there are no allergic reactions or intolerances. Texture is very important in order to minimize the risk of choking. Don’t offer any food that requires chewing, but rather soft foods in a mashed or pureed consistency. Start with as little as 1 teaspoonful once daily and gradually increase. It is more important to pay attention to baby’s cues than it is to focus on offering a specific amount at each feeding. Pause after each spoonful and gauge baby’s interest in taking more.

Finally, don’t forget to continue those vitamin D supplements if your baby is fully or partially breastfed. Until babies have a consistent source of vitamin D in their diet such as fortified cow’s milk, they remain at risk of deficiency.

For more information, go to www.healthychildren.org and browse the section on infant nutrition which includes sample menus!